The winning climate for the coolest team - the Minnesota Lynx

The winning climate for the coolest team, the Minnesota Lynx

The playoffs season started with a thrill for the Minnesota Lynx professional women’s basketball team. They had to find a new home in a very short period of time. Their usual place, the Target Center, was under-going renovations and the Xcel Arena was being prepared for football season.

It was ultimately determined that The University of Minnesota’s Williams Arena would be the best place to host the playoffs. Not only is it an exciting environment, but it’s also where the 14-year veteran Lindsay Whalen graduated. After starting all 22 games for the season, she was absent for a month while recovering from a broken left hand, but came back on court just in time for the playoffs.

However, the 92 years old building’s air conditioning system was not enough to provide the proper temperature for athletes and fans, according to the guidelines of the league. That is when Aggreko was called to install a huge air conditioning solutions in a very limited time and space. Rental air conditioning for the arena

Spaghetti mess, big spider or gigantic octopus. These were some of the nicknames people have given our cooling system at Williams Arena for the Minnesota Lynx playoffs. It was indeed a huge structure and one of our coolest projects of the year.

Fortunately, the combination of chillers, generators, air handlers and a lot of engineering and technical work had created the winning climate for the Lynx. During last night’s winner-takes-all Game 5 of the playoffs, they beat the Los Angeles Sparks 85-76. 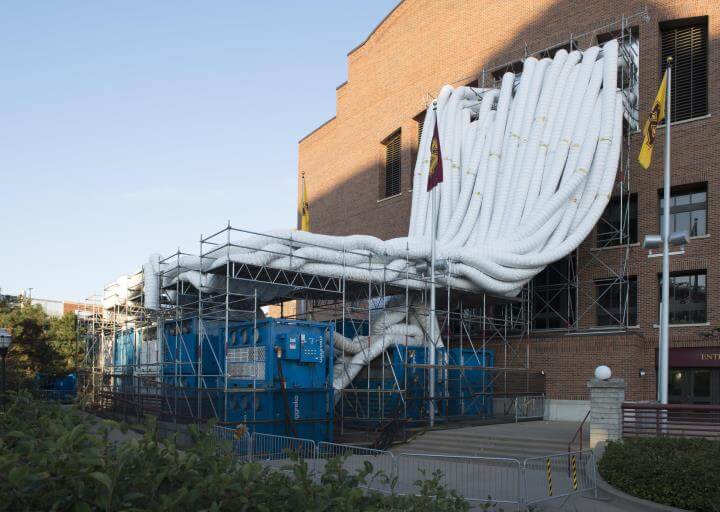 A cool way to win a fourth WBNA trophy

This is the 4th WNBA title for the Lynx, after a very good 20-2 season. With a sold out crowd of 14,632 fans, the Lynx roared loud to victory after beating the Sparks.

Talking about numbers, MVP Sylvia Fowles, had 17 points and broke her own WNBA Finals record by grabbing 20 rebounds. Maya Moore scored 18 points, had 10 rebounds, and hit a huge backet with 26 seconds to play. Seimone Augustus added 14 points to help the Lynx tie with the Houston Comets for most titles in league history. The Comets were the first team to win four championships for the WNBA.

This is the perfect ending for the Lynx season. It turns out that the quick change of place worked out after all. Lindsay Whalen won at the same place she started her career and her photo now hangs in the hallway of her old college arena. Thanks to these amazing women, Minnesota gets their fourth national championship trophy. And thanks to Aggreko, it all happened at the right temperature. It was a winning climate from beginning to end!

Freeze and thaw an ice rink