For twelve years counting, one weekend and a city block are dedicated to art and generosity due to the Via Colori® Street Painting Festival. The event gathers more than 200 artists to create a massive outdoor art gallery with live concerts, food and family activities. All proceeds benefit The Center for Hearing and Speech, a local non-profit organization that serves children with hearing loss.

This year, Via Colori took place on November 18 and 19th and Aggreko was proudly one of the sponsors that supported the event. Through our sponsorship, our artist and Aggreko family member, Brenda Melgar, donated her time and talent to draw a 10’ ft square mural using only chalk.  The image she picked was a tribute to the Houston Astros, who brought the first Baseball World Series championship to Houston, just after the devastating impacts of Hurricane Harvey.

Together, we are Houston Strong

Brenda was born and raised in Houston and had lived through tropical storm Allison and Hurricane Ike, but never anything like Harvey. According to her, “when the Astros made it to the World Series, it was like the whole city was given this positivity and great hope to momentarily take away the hurt Harvey caused. Instead of something terrible uniting us, we had our hometown team uniting us through their amazing talents and achievements.”

The artist made use of an analogy to relate the artwork with us: “Aggreko is always there to light cities when the power goes out. Metaphorically and literally, Houston’s light went out when Harvey struck, but a light brought hope and happiness to the city, and that light was the Astros World Series’ win.” 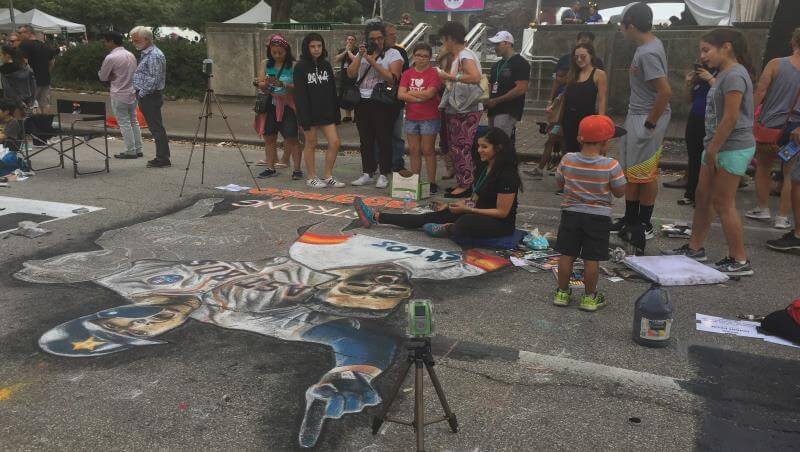 A passionate artist and a great cause

Melgar began participating in Via Colori in 2007, through a contest among high schools, called “Via Apprentista”. She won for the 2007-2008 and 2008-2009 school year, and was invited to come back each year throughout college and beyond. She clearly has a passion for the event:

“Via Colori is a great cause because it is the only center of its’ kind in the Houston area. The center does a lot for families of hearing impaired children in helping them become more independent. Children learn listening, speaking, and reading skills without the use of sign language. I LOVE this because it is not only a family friendly event; it is also supporting a great center” – said Brenda.

Her commitment to art began in kindergarten, when she would constantly copy cartoons from her books, like Winnie The Pooh, 101 Dalmatians, and The Lion King. “In second grade, my elementary school teacher, Mrs. Mercado, would let me draw with pastels when I’d finish school work. She was one of my biggest motivators, as she saw talent in me. She bought me my first kids’ art set full of coloring pencils and pastels. From there, I continued on with traditional painting and performance painting. My high school art teacher, Miss Moore called me 'a freak of nature' and continued to challenge me with trying different mediums and techniques”.

Thanks to these challenges, Brenda is now able to draw with chalk on the concrete, which is no easy task. At least she counts on her husband Chris to help. In her own words, when it comes to drawing at Via Colori, she is Batman and he is Robin. And everything is supervised by their four-year old son, Ramsey, who also participates.

She always encourages her son to draw anything he wants. “Seeing how his mind works has helped me loosen up as an artist. By that I mean that I’m not going to be heartbroken if a painting doesn’t look like a photograph”. According to Brenda, her family reminds her to have fun and enjoy her work as an artist. “If I’m not enjoying the artwork, then I’m not doing it right. If I’m stressing, my husband knows it, and my four year old and three month old will probably sense it”. 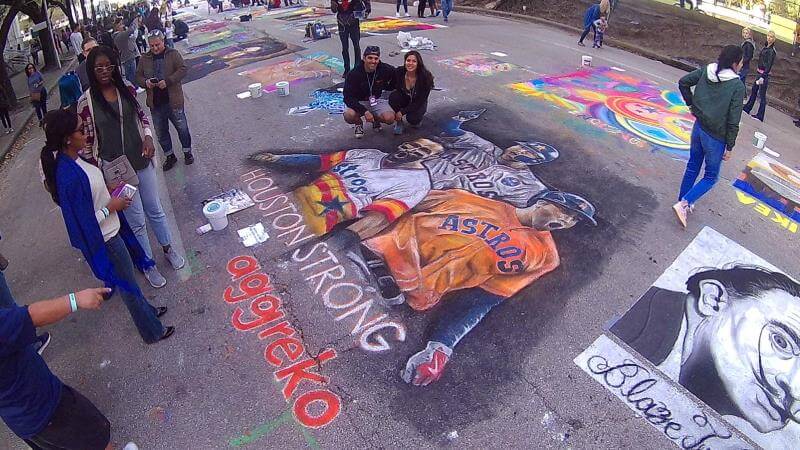 We are really big fans of the color Orange, which made it really easy for us to sponsor a tribute to Astros at Via Colori. We truly admire their commitment and talent to overcome difficult times and bring a world championship home for Houston. The resilience and passion to surpass challenges is also part of our culture as we strive to continually make a massive difference to businesses and communities all over the world.

At Aggreko, we are very proud to have contributed to the festival and The Center for Hearing and Speech. If you want to know more about the organization and the event, check out their website and stay tuned for next year’s edition. Last but not least, if you want to learn more about Brenda’s artwork, visit her website here.